Jeanine and I attended a friend’s wedding today. Since the wedding began at noon and we weren’t sure when we’d be home we decided to let the ferrets have the run of the house while we were gone. This was a mistake. Now I know ferret owners that let their weasels run loose, unsupervised and it works for them. They tell me that their fuzzies eventually get bored with trashing the house/apartment… eventually. Yeah, no. We keep our ferrets in a spacious, safe, comfortable cage when we can’t watch them.

I should explain myself for those of you who’ve never owned ferrets. I want you to imagine a kitten, or puppy. Imagine an especially energetic kitten, or puppy. A kitten, or puppy that has a fetish for something rubber, or something leather, or something shiny. Now, make it fearless, able to climb like the devil, and smart enough to build ladders and bridges and violá, you’ve got a ferret! Maybe I exaggerate, but not by much. Years ago our weasel, Chaplin, learned how to unlock his cage. Later that year his bossom buddy, Mojo, learned how to defeat the child locks on our cabinets. Mojo found Chaplin and nipped him so that he would chase him to the cabinet and then proceeded to demonstrate his technique until Chaplin had mastered it too. Yeah. I had to find a new place to store my flour and sugar that day.

Don’t get me wrong, ferrets are gentle, intelligent, playful, joyful pets that are completely worth the effort, but they need– boundaries; and they need supervision or they’ll cross them. Thankfully, ferrets are short on both attention span and stamina. They bore easily and sleep most of the day (and by “most” I mean a good 16-18 hours)– but BOY are they busy when they’re awake!

After all this you’re thinking “why the hell did this man leave them alone”?! Over-confidence? Optimism? Stupidity? Probably stupidity. Our ferrets are middle aged and have slowed down. We’re used to their habits and have set up a free area that is mostly immune to their shenanigans which has given us the confidence to step out for an hour or few even if they’re loose. But you just never know when a ferret is going to discover a new trick and ambush you with it!

Unfortunately, I didn’t have the presence of mind to take pictures because the mayhem was impressive. Cricket, the smartest of our three, figured out how to climb into Pixel’s bassinet which is close enough to our entertainment center for him to use as a bridge. The entertainment center is VERY off-limits which makes it irresistible to ferrets. Normally he wouldn’t be able to get in the bassinet in the first place because the last several inches of its lip are too smooth for him to gain purchase, but he must have used the adjacent shelf to brace himself so he could spring his paws against the vertical surface of the bassinet. I’ve seen him climb other things like this before. Remember that scene in the Matrix when they’re escaping the building by crawling through the walls? Just like that. 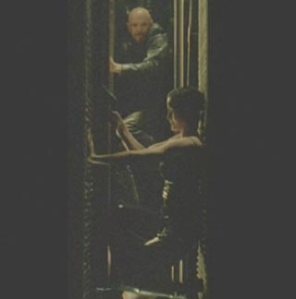 When we arrived we found our $75.00 universal remote on the living room floor with its highly-attractive, rubber buttons removed and every other remote scattered throughout the room. The framed pictures also knocked onto the floor but thankfully unbroken. I found our weather station in the kitchen along with a thoroughly chewed pack of baby-wipes. Some of the lighter electronics like the AppleTV had been relocated as far as their cables allowed in an attempt to satisfy some weasel feng shui! Jeanine found Cricket, sleeping alone in his new bassinet Fortress of Solitude under Pixel’s pink, knit blanket. Jeanine promptly returned him to “jail”

Never turn your back on a weasel.

4 thoughts on “Never Turn Your Back on a Weasel”